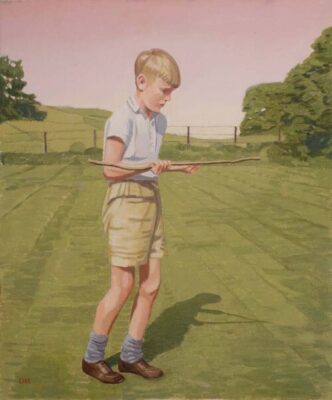 The Cornwall Library is honored to present a selection of paintings by artist Duncan Hannah (1952-2022). Hailing from Minneapolis, Hannah went to Bard College and Parsons School of Design where he became a hard-partying insider in 1970s punk New York. In the 1980s, with sobriety, he matured into a highly regarded and original painter, working in a seductive figurative style that was uniquely his own, and today Hannah’s work can be found in many museums including the Metropolitan Museum of Art.

Early on, his work puzzled fellow artists and critics alike, who expected him to use the abstraction that dominated the period. Confronted by Hannah’s representational pieces that bring to mind vintage films or empty foreign towns, they were stumped. Or contemptuous. “They just assumed I was being ironic and this was some kind of critique of art history, which it wasn’t,” Hannah told CBS in 2018. “It was more of a love letter to art history.”

Over time, his work caught on. Barry Blinderman, director of the Semaphore and Semaphore East galleries in Manhattan at the time and among the first to exhibit Hannah said, “When I exhibited his paintings throughout the 1980s, a wide audience responded to their dreamy teleportation to a time of innocence, their Cézannesque brushstrokes, their sense of mystery.”

The “mystery” in Hannah’s paintings can evoke Edward Hopper, but in the words of the late Glenn O’Brien, writing for Art Forum, he was “the Henry Mancini of the New Wave, or the power-pop Balthus.” Hannah’s knowledge of music, film (especially French) and art history was formidable, but above all he loved reading; for twenty-six years the Cornwall library sale was a highlight of his summer calendar.

Hannah’s personal journey is riveting. Famously good-looking — “beautiful” is the word often used — he was pursued by both sexes in the Warhol/CBGB social scene. (To the surprise of some, he stuck to women.) He knew them all: the Talking Heads, Allen Ginsburg, Anna Sui, Basquiat, Hockney. And was everywhere from Janis Joplin’s dressing room to Anna Wintour’s best-dressed list. Luckily for us, in 2018 Knopf published 20th Century Boy: Notebooks of the Seventies, a critically well-received journal of his adventures, scandalous or otherwise, based on his extensive diaries of the period. Oh, and he starred in two indie films with Debbie Harry —one of them is on Youtube, which also has a couple of interviews with him. You’ll be charmed.

Collected Works by the Late Duncan Hannah, an art exhibition at the Cornwall Library from October 29 to November 27, will display a selection of paintings collected and organized by his wife, Megan Wilson, a leading book cover designer. She and Mr. Hannah divided their time between Cornwall and New York for many years.