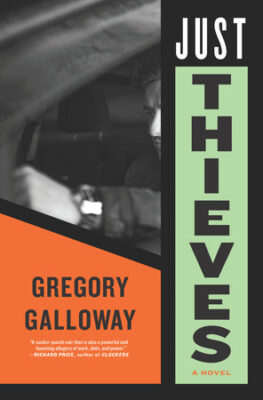 Please join us for a Book Signing on Saturday October 16. 3-5 pm with Gregory Galloway and his thriller ” Just Thieves ” at the Wish House in West Cornwall.

Gregory Galloway is the author of the novels The 39 Deaths of Adam Strand and the Alex Award-winning As Simple As Snow. His work has appeared in the Rush Hour and Taking Aim anthologies, as well as the Cornwall Chronicle. Greg is a graduate of the Iowa Writers’ Workshop. He currently resides in Cornwall, CT.

About the book :
Career thief Rick, the narrator of this stellar noir from Galloway (The 39 Deaths of Adam Strand) set in an unnamed part of the U.S., learned dishonesty from his father, a crooked building inspector. After Rick’s girlfriend, Denise, gives birth to their daughter, the couple split, but Rick becomes concerned about the new man in Denise’s life, a drug addict. Rick seeks help getting the drug addict out of the picture from Froehmer, a friend of his dad’s, who agrees to take care of the problem. In exchange, Rick steals tools and equipment on demand from construction sites. Rick’s proficiency at boosting stuff leads to another request from Froehmer—to burglarize a home to steal a box. That successful assignment leads to other burglaries and to Rick’s eventual acquisition of a partner, Frank, who has the tech skills to evade alarms and surveillance. The partnership results in murder and the tightening of the screws around Rick. Galloway is as good at characterizations as he is at tight, and surprising, plotting. Michael Kardos fans will be eager for more from Galloway.